In 1964, after two years of promoting cryonics, Evan Cooper fumed in exasperation, "Are we shouting in the abyss? How could 110 million go to their deaths without one, at least trying for a life in the future via freezing? Where is the individualism, scientific curiosity, and even eccentricity we hear so much about?"[2] From 1966 until 1973, of the 17 attempt freezing, only one person remain in cryopreserved[2] (hence the bumps at the beginning of the curve in the graph below). Consequently, the "pay-as-you-go" funding model was abandoned by the cryonics community as relatives had shown to generally eventually lose interest in paying maintenance fees. From then onward, the number of cryopreservations would grow exponentially, but to this day still represent a trivial amount in comparison to the number of burials and cremations. Since cryonics was first publicized, an estimated 2.9 billion people died[3], which could represent about 2.7% of humans to have ever lived[4]. As of January 2019, 416 people are know to be cryopreserved.

The following graph shows an history of the number of bodies preserved (complete or neuro-only). Given that the quality of preservations varies a lot, and it can often take many hours or even days before someone gets preserved from the time of their clinical death[5][6], the graph below represents an upper bond of the number of people that are preserved: some have probably been irreversibly lost, and some might only have been partially preserved. Given that we don't currently know how effective current preservation methods are, the lower bond for the number of people that have been preserved remain 0.

Alcor is the only large cryonics organisation that has tracked the number of fully-funded members they've had since their beginnings[7]. The graph below shows the change in their membership quantity. The recent growth has been pretty linear. However, given that there are more and more cryonics organisations, worldwide cryonics memberships is likely to approach more an exponential growth. 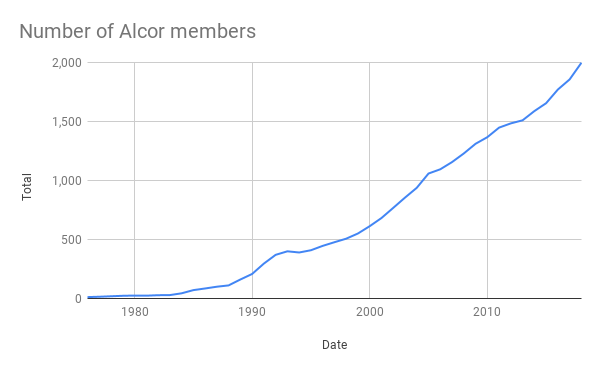 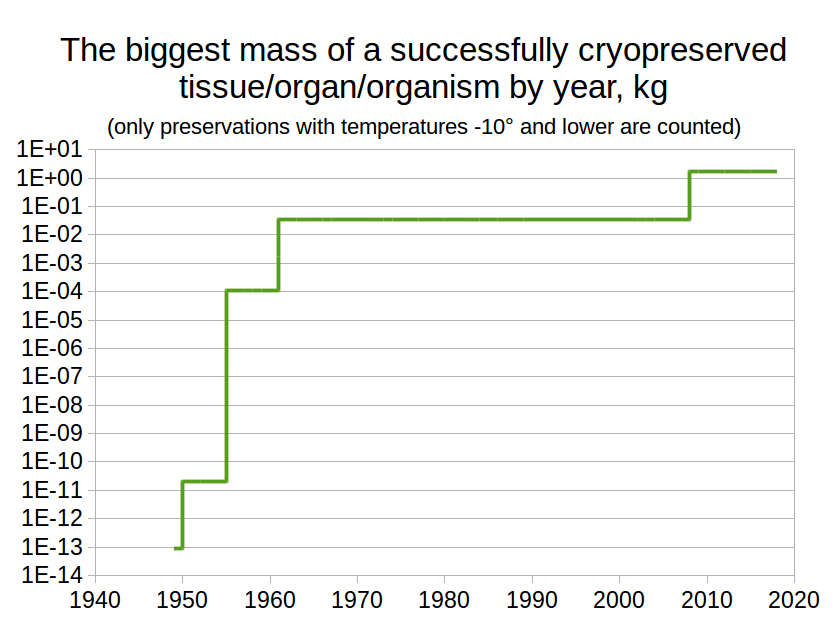