From Timelines
Jump to: navigation, search
The content on this page is forked from the English Wikipedia page entitled "Timeline of global health". The original page still exists at Timeline of global health. The original content was released under the Creative Commons Attribution/Share-Alike License (CC-BY-SA), so this page inherits this license.

This page is a timeline of global health, including major conferences, interventions, cures, and crises.

During this pre-WWII era, there are three big trends that operate separately, but sometimes affect each other in development and outcomes.

First, a trend of urbanization (fueled by the Industrial Revolution) as well as greater global trade and migration leads to new challenges, including those in urban sanitation and infectious diseases/pandemics. Six global cholera pandemics happen in this period because of increased commerce and migration.[1]:125

Second, there is a lot of development on the underlying theory of disease, advancements in vaccine and antibiotic development, and a variety of experimental large-scale eradication and control programs. One big example: the germ theory of diseases begins to become accepted and popularized starting around 1850.[2] Another big example is the development of the smallpox vaccine by Edward Jenner in 1796.[3] Systematic eradication and control efforts include the Rockefeller Sanitary Commission and efforts to eradicate smallpox.[4] Antitoxins and vaccines for numerous diseases including cholera and tuberculosis are developed during this period, building on a trend of greater understanding of and control over microorganisms.[5]

Following the end of World War II, the first batch of big organizations, both international and national (with international cooperation), including the United Nations and World Health Organization (WHO), form.[1] Beginning with the United Nations Relief and Rehabilitation Administration for relief of victims of war in 1943, there is a big push to begin creating large scale health initiatives, non-governmental organizations, and worldwide global health programs by the United Nations to improve quality of life around the world. UNICEF, the World Health Organization, as well as the UNRRA are all part of United Nations efforts to benefit global health beginning with developing countries. These various programs aim to aid in economic endeavors by providing loans, direct disease prevention programs, health education, etc.

After wrapping up complications caused by the end of the war, there is an international energy put in into eradication, beginning with the complete smallpox eradication in 1979. There is greater dissatisfaction with WHO for its focus on disease/infection control at the expense of trying to improve general living conditions, as well as disappointment at its low budget and staffing. This atmosphere spurs other organizations to provide their own forms of aid.[6]:6[1]:126 The Alma Ata Declaration and selective primary healthcare are created to express urgent action by all governments and citizens to protect and promote the health of all people equally.[7] More organizations form following these new active attitudes toward global health, including the International Agency for Research on Cancer and the Doctors Without Borders organization. Publications like the WHO Model List of Essential Medicines highlight basic medicines required by most adults and children to survive, and set priorities for healthcare fund allocation in third world countries.[8] Generally, there is more buy-in for the idea that direct, targeted efforts to address healthcare could be worthwhile and benefit many countries.

Certain specific efforts increase in efficiency and productivity, including improvement in maternal and child health and a focus on HIV/AIDS, tuberculosis, and malaria (the 'Big Three') in developing countries. During this time period, the child survival revolution (CSR), which helps reduce child mortality in the developing world, and GOBI-FFF are both advocated by James P. Grant.[9] The World Summit for Children also takes place, becoming one of the largest ever gathering of heads of states and government to commit a set of goals to improve the well-being of children. Finally, HIV/AIDS becomes the focus of many governmental and non-governmental organizations, leading to the formation of the Global Programme on AIDS (GPA) by efforts of the World Health Organization.[6]:6 However, these health organizations also make significant advancements to tuberculosis treatments, including the DOTS strategy and the formation of the Stop TB Partnership.[10]

UN's Millennium Development Goals establishes health care as an important goal (not just combating infectious diseases).[6]:7 Later in 2015, the Sustainable Development Goals build on the MDGs to outline the objectives that will transform our world by ending poverty, helping the environment, and improving health and education. More specific disease-targeting organizations are created primarily to fund healthcare plans in developing countries, including the President's Emergency Plan for AIDS Relief and The Global Fund to Fight AIDS, Tuberculosis and Malaria.[11] These organizations (especially the WHO) adopt new strategies and initiatives, including the 3 by 5 Initiative to widen the access to antiretroviral treatment, the WHO Framework Convention on Tobacco Control, etc.[12] Private large donors such as the Bill & Melinda Gates Foundation begin to play an important role in shaping the funding landscape and direction of efforts in global health.

The following table summarizes per-year mentions on Google Scholar as of May 30, 2021.

The comparative chart below shows Google Trends data for Global health (Search term) and Global health (topic) from January 2004 to February 2021, when the screenshot was taken. Interest is also ranked by country and displayed on world map. See the spike in interest around 2020 as a result of the Covid-19 pandemic.[13] 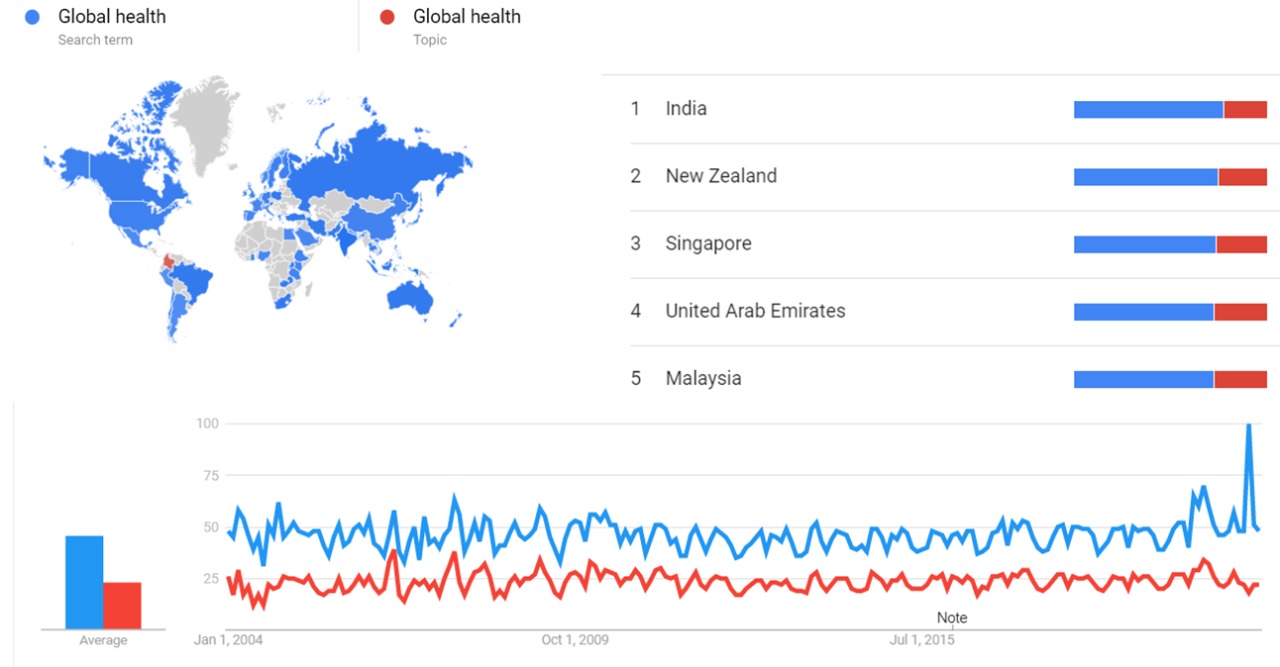 The chart below shows pageviews of the English Wikipedia article Global health on desktop from December 2007, and on mobile-web, desktop-spider, mobile-web-spider and mobile app, from July 2015; to January 2021.[15] 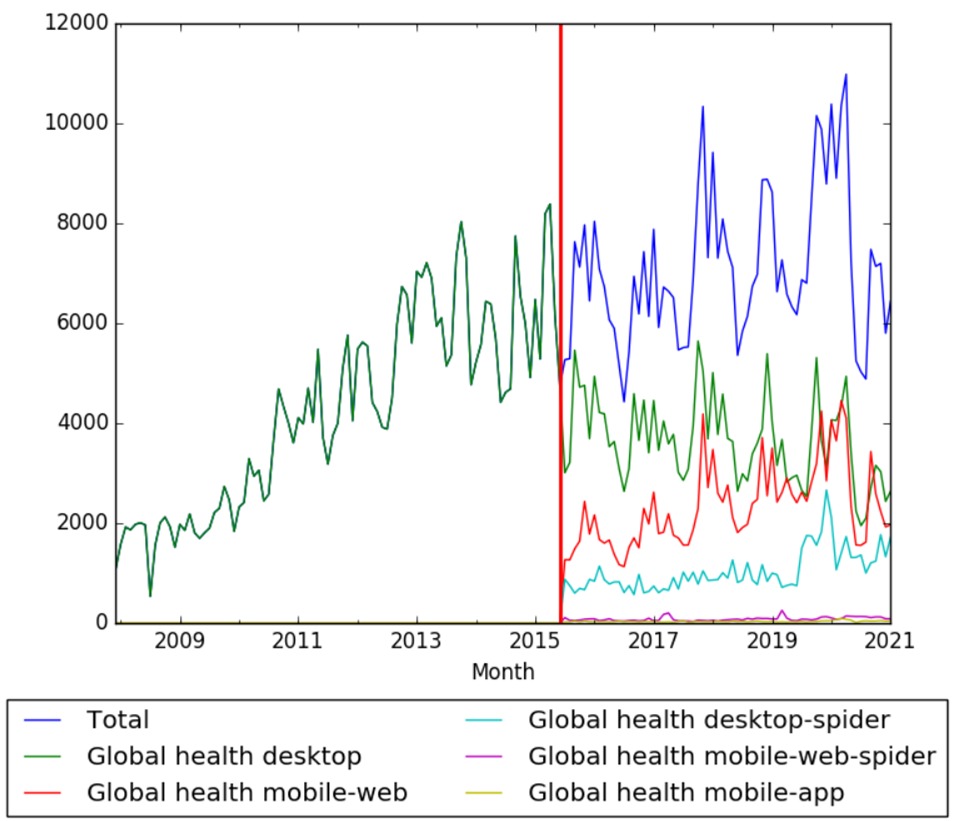 The following events are selected for inclusion in the timeline:

We do not include:

The initial version of the timeline was written by Issa Rice.

Feedback for the timeline can be provided at the following places: